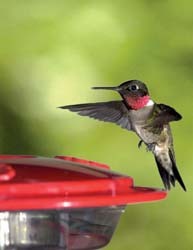 Prepare for your neighborhood to be all abuzz, because hummingbirds have been spotted throughout the area. These miniature marvels have been migrating between North and Central America for hundreds of years, a round trip in which millions of hummingbirds instinctively participate. Get those feeders up today!

For the next few months, backyards around the area will be playing host to these amazing, food-frenzied birds. They possess the fastest metabolism of any animal on the planet, burning through between one to two times their body weight in food every day.

Hummingbirds will head back to Mexico and Central America in late summer, early fall.

Hummingbirds differ from other birds in a variety of ways. They have weak feet and legs that are used more for perching than walking. They are most comfortable in the air, and they are capable of hovering as well as flying up, down, forward and backward.

According to research, hummingbirds hold the record for possessing the fastest metabolism of any animal on the planet. Hummingbirds can consume up to twice their body weight in nectar every day. In order to accomplish this amazing feat, hummingbirds’ bills and tongues have evolved into incredibly efficient feeding tools.

Despite popular belief, hummingbirds do not suck up nectar with their bills. They actually lap it up with their tongues. While dipping their grooved tongues into nectar sources at up to 12 times a second, the nectar is drawn up and into their mouth each and every time. You can see this remarkable tongue in action with our WBU® Hummingbird Feeder. It features a transparent bottom that allows you to see a hummingbird’s long tongue and rapid lapping action.

Hummingbird nests are made of plant down, glued together with spider webs and tree sap. These nests are usually located on pencil-sized limbs and are camouflaged with bits of lichen.

Female hummingbirds raise their young alone. Due to the males’ extremely aggressive territorial behavior, females will establish a nesting area outside of the males’ feeding territory.